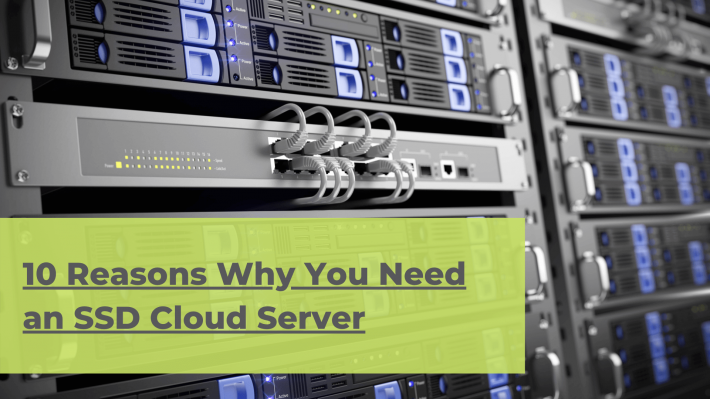 The below video explains what SSD-based Cloud Hosting is –

Now that we know the meaning of SSD-Cloud Hosting, here are 10 reasons why you need an SSD-Cloud Server for your site.

When you host your website, speed is one of the most important aspects. A site that is slow to load tends to lose customers and SEO points. An SSD has no moving parts, and the read/write rates are very high. Hence, an SSD-based server processes requests much faster than an HDD-based server.

With the traditional hard disk drives or HDDs, fragmentation was a major issue causing performance problems. An SSD has no such issue and ensures that file access is faster than HDD. Hence, SSD-based Cloud Hosting plans perform better than HDD-based plans.

Traditional HDDs had physically moving parts that were prone to wear and tear and carried a risk of data loss. In SSDs, since there are no moving parts, there is no risk of wearing out. Also, SSDs are safely portable, making them a more reliable option.

SSD’s generate lesser heat as compared to HDDs and also save nearly 80% energy. Globally, all businesses are trying to move to greener technological options. By opting for an SSD-based Cloud Hosting Server, you ensure that your carbon footprint is minimal.

When you look at technological devices, one thing is certain – they all fail at some point. MTBF, as the name suggests, is another way of defining the lifespan of a device. SSDs have a longer MTBF value as compared to HDDs. This is because HDDs have physically moving parts while SSDs use microchips for data storage.

6. Faster boot time for the OS

When you host your site on a web server, there are times when the server needs to be restarted. This can be to complete the installation of an update or for any other reason. With an HDD, the boot time of the OS is around 30-40 seconds. However, with an SSD, this drops down to 10-12 seconds only. This can make a huge difference since every second your site is down can hurt your business.

7. No effect of magnetism

Magnetic fields are known to be dangerous for web servers. HDDs use magnetism to write data. Hence, a magnetic field could corrupt that data or even erase it. With SSDs, there is no such concern since they use microchips and are not affected by magnetic fields. Hence, even if a magnet gets placed near the server accidentally, it won’t damage the data.

Most websites that have heavy media to be displayed require a server that can process large volumes of data quickly and efficiently. For such sites, SSD-Cloud Hosting plans can be a boon since the combined benefits of Web Cloud Hosting and SSD ensure that there is no latency and site requests are processed without any delay.

A Distributed Denial of Service (DDoS) attack disguises itself as site traffic and tries to overwhelm the server causing it to work slowly or crash. This is done by a hacker to gain unauthorized access to your site. With SSD Cloud Hosting, since the processing speed is fast and the cloud network helps manage site traffic, DDoS attacks can be tackled better. Also, most Cloud Hosting providers leverage these strengths to keep DDoS attacks at bay.

While SSD-based Cloud Hosting plans are costlier than HDD-based plans, the benefits offered by them far outweigh the costs. Also, when the power of an SSD is combined with the scalability, power, and efficiency of a Cloud Hosting service, you get a highly cost-effective hosting plan.

If you are looking for Cloud Hosting in India, then ensure that you consider an SSD-based plan before making a decision. Look for a Cloud Host that offers both SSD and HDD-based plans, compare them, and choose the best Cloud Hosting plan for your site. Good Luck!