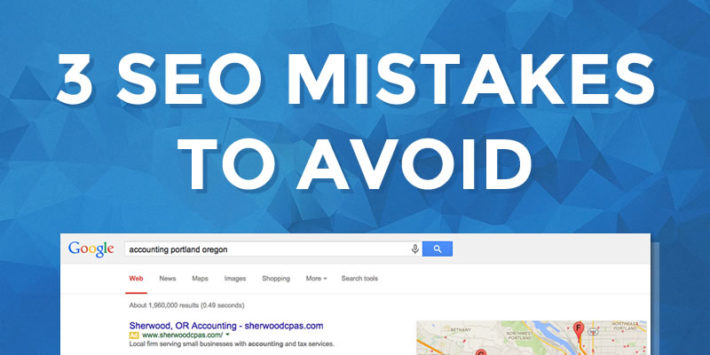 Modern customers don’t often find businesses by strolling down the street or opening the Yellow Pages. In fact, you can’t even find a print version of the Yellow Pages to open anymore. Instead, the new frontier in marketing is the internet — and internet search engines especially.

That’s the reason so many businesses focus on their search engine optimization (or SEO) — techniques by which they hope to move higher on results pages on sites like Google and Bing. SEO is vital for your business’ future, but you have plenty of pitfalls to avoid along the way. Here are some mistakes to steer clear of.

Few things make Google think less of your website than seeing content that it considers to be duplicating text that exists elsewhere on the internet. If you copy and paste sections of text from other sites, you’re not just plagiarizing; you’re also torpedoing your SEO.

So you just need to be very careful about not copying any text, right? Well, actually, it’s more than that. You also have to worry about different versions of your own site. Don’t use duplicate content on multiple pages of your site, and be wary of how your site is organized on the back end. Webmasters need to set up mobile and desktop sites in such a way as to show Google what’s going on; careless work could cause Google to view the sites as two giant copies of each other, and to penalize your site(s) accordingly. Other aspects of your site’s organization matter, too, by the way — from outdated designs to poor link structure, you’ll find a lot of ways to annoy Google.

You can do a lot to make your website more appealing to Google, and some of it actually helps Google. The more that sites conform to certain Google-backed norms, like creating sitemaps and using “nofollow” HMTL tags, the easier it is for Google to do its job.

But Google does want to do its job, and its job is to deliver the best answers to its users. If SEO techniques are too successful, they could help sites Google might consider unworthy to edge out sites that Google’s users find more useful. So Google, understandably enough, isn’t exactly a fan of SEO. Google would presumably have an easier time developing its algorithms if it could trust everyone not to try to game those algorithms.

Still, Google understands that it can’t change the reality. SEO is a legitimate endeavor, and Google can’t stop that. However, Google does draw the line somewhere. If you engage in practices that Google finds dishonest — a classic example is using white text on a white background to spam keywords where users can’t see them but Google’s web crawlers will read them — then Google will get mad. You could find yourself penalized for using these “black hat” tactics: if you’re caught, Google could drop you down the results page, giving you the opposite of the result you want. This shady side of SEO isn’t illegal, but it’s also not illegal for Google to drop your website from its results.

A lot of little mistakes can cost you big-time in search engine optimization. And each of those potential pitfalls is another reason to make sure that you don’t make a larger mistake: Trying to do all of this stuff on your own.

If you run a small business, you’re probably not an expert in SEO. That’s OK, because you’re focused on the things that make your business great. What’s not OK is pretending that SEO is something that’s simple enough to handle on a DIY basis or with a fly-by-night contractor that your dentist recommended. You need a real digital marketing team that offers the best link building service and a suite of other digital marketing, online reputation management, and SEO tools.

SEO is complex and ever-changing, so outsource your SEO needs to professionals who keep tabs on all the latest developments, day after day and month after month. That way, you’ll get elite SEO, and you won’t have to worry about the many other mistakes that aren’t listed in this article.